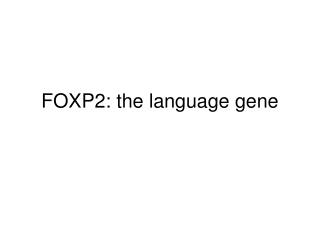 FOXP2: the language gene. Talk of genetics and vice versa. Steven Pinker Commentary on Lai et al. The possibility that human language ability has genetic roots was raised about 40 years ago by the linguist Noam Chomsky and the neurologist Eric Lindberg. Animal &amp; Human Language - . chapter 2 . what is linguistics?. it is the scientific study of human language.