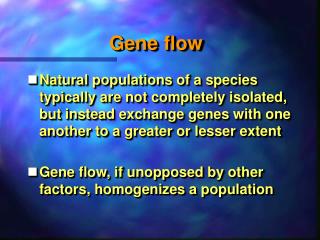 Gene flow. Natural populations of a species typically are not completely isolated, but instead exchange genes with one another to a greater or lesser extent Gene flow, if unopposed by other factors, homogenizes a population. Models of Gene flow. Island models Stepping stone models Gene flow - Plant of the day drosera rotundifolia ... a miniscule, carnivorous sundew living in bogs in tofino , bc. .

1) Gene flow - . a) is movement of alleles from one population to another b) counts as true gene flow only if immigrant

Gene Flow in Lions - . introduction one of the greatest dangers to small populations is related to gene flow

Gene - Nucleic acids. ● include dna and rna information storage molecules they provide the directions for building

Gene - . a unit of heredity that controls the development of one trait made of dna. allele. member of a paired gene one