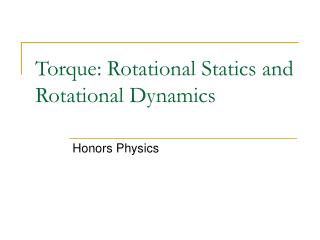 Torque and Equilibrium - . physics 12. torque. in the past we have looked at forces that have acted through the centre of

Rotational Dynamics - . moment of inertia. the angular acceleration of a rotating rigid body is proportional to the net

Rotational Equilibrium and Dynamics - . chapter 8. magnitude of a torque. what is a torque? a quantity that measures the

Untightening torque - . can we use the untightening / tightenigng torque ratio to estimate the efficiency of heico-lock

Lecture – 4 Torque and Levers The Mechanics of Rigid Bodies - . experimentalphysik i in englischer sprache 13-11-08.

Rotational Mechanics - . ap physics c: mechanics. enough with the particles…. do you ever get tired of being treated

Ch 9. Rotational Dynamics - Forces and torques. net force  acceleration . what causes an object to have an angular

Chapter 8 Rotational Equilibrium and Dynamics - . 8-1 torque. torque (t). a quantity that measures the ability of a force