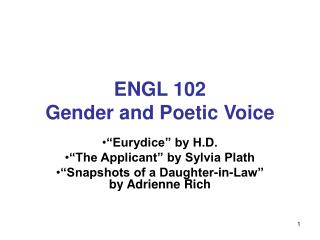 ENGL 102 Gender and Poetic Voice. “Eurydice” by H.D. “The Applicant” by Sylvia Plath “Snapshots of a Daughter-in-Law” by Adrienne Rich. Orpheus and Eurydice. Painting from 1806 by C. G. Kratzenstein-Stub, 1793-1860. Ny Carlsberg Glyptotek, Copenhagen.

ENGL 101 - Introduction to passive and active voice. engl 101. our goals today are: a. to understand the difference

Welcome to ENGL 1302 - . raiderwriter (rw). create an account: https://raiderwriter.engl.ttu.edu/ use your ttu email

Is Gender in trouble? - . introduction. before we begin, what really is gender? contexts of gender why is the

Introduction to Gender - . guest lecturer: jennifer carlson. our plan. why gender? what is gender? why do people

Poetic Devices - . the slides that follow are poetic devices that you may find in some of the poems you read. mrs.

Gender and Society - . how does gender impact our lives?. coming up. this week: the pervasiveness of gender gender roles