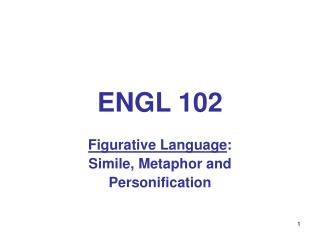 ENGL 102. Figurative Language : Simile, Metaphor and Personification. Robert Frost on his own poetry:.

An Overview of the Accelerated Learning Program (ALP) The Community College of Baltimore County - . outline of t he

Parody and ya-o-i - . ya-o-i: ya ma nashi, ochi nashi, i mi nashi or no build-up, no foreclosure, and no meaning. mainly

ENGL 107 - . i’ve decided that if you wait for the perfect time to write, you’ll never write. ~margaret atwood. week

Seinfeld and Comedy - . engl 2030: experience of literature—drama [lavery]. “life is a comedy to those who think, a

ENGL 102 Gender and Poetic Voice - . “eurydice” by h.d. “the applicant” by sylvia plath “snapshots of a