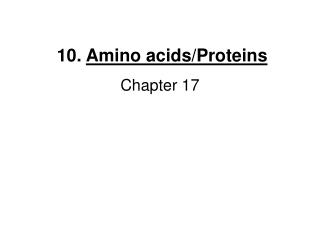 10. Amino acids/Proteins Chapter 17. Protein - More than an Energy Source. Proteins / polypeptides - chains formed by the condensation/combination of 20 different  - amino acids. Polypeptides - may be di-, tri -, etc; up to 10 a.a. Cytosol - Cytoplasm refers to the jelly-like material with organelles in it. found in plant and animal cells. if the

CHAPTER 19 - . amino acids and proteins. the importance of proteins …. many functions in the body! (supportive,