If you had only 7 days to live, what would you say? - PowerPoint PPT Presentation 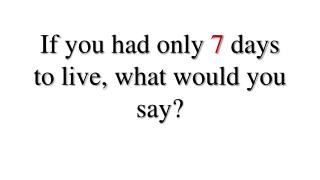 If you had only 7 days to live, what would you say?

If you had only 7 days to live, what would you say? The Power of Positive Sayings for the Day [7 Days Quotes] - There are lots of problem in our living life. this ebook will 7 DAYS - Make an informal complaint. report inappropriate behavior without initiating a full investigation. this may be

Do You Know Where You Live? - . you live in a place that used to be a forest!. eastern deciduous forest. on the piedmont.

The 7 Habits of Highly Effective People Habit 2: Begin With the End in Mind - . c. kohn, whs based on the book by the

Donkey’s - . by aine waters . donkey’s. “donkey facts”. donkey’s are sometimes refried to as a “ helping

John Lennon - . by: autumn thomas. the life of john

This Could Be The Day That Changes Your Life! - . what i am about to share with you has the ability to change you

One Day Left to Live

A Day in the Life… - . exploring the lives of kids around the world. spain’s national anthem. long live spain! we

What would you do?

The Day of Atonement was the most solemn of all days in Israel. This was the day of National and Sanctuary Cleansing.