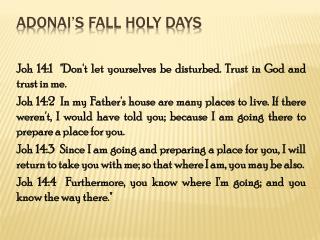 Joh 14:1 "Don't let yourselves be disturbed. Trust in God and trust in me. Joh 14:2 In my Father's house are many places to live. If there weren't, I would have told you; because I am going there to prepare a place for you. Holy Spirit and Spiritual Formation - . the spirit-filled life. it is christ-directed life by which jesus lives his life

Number of the Days - . number of the day for days 72-76. created by: michelle fowler barrow county schools. eq: how do i

You do have time for this… - . holy. holy holy holy is the lord god almighty. holy. heaven and earth are filled with

Welcome to our House Mass - . . we gather together . in the name of the father, and of the son, and of the holy spirit

Holy is the Lord - . we stand and lift up our hands, for the joy of the lord is our strength, we bow down, and worship

GREAT ARE YOU LORD - . great are you lord (4x) holy, holy god all mighty its a previledge to worship you... maker of the

Question for 100 - . what is the difference between ahadith and sunnah of holy prophet (saw)?. answer for 100. ahadith :

THE HOLY QUR’AN THE ‘ALAQ’ CLINGING TO THE UTERUS - Based on the works of harun yahya www.harunyahay.com including:

Biblical Zionism and the Restoration of Israel - . by dr. gavin finley endtimepilgrim.org. for jerusalem’s sake.