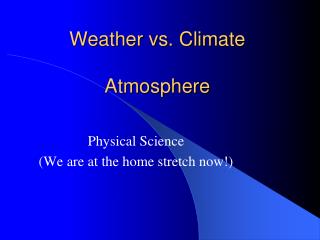 Weather vs. Climate Atmosphere. Physical Science (We are at the home stretch now!). Introduction to the Atmosphere. Weather and Climate. Weather the state of the atmosphere at a given time and place constantly changing Climate WEATHER, CLIMATE, &amp; ATMOSPHERE - . earth’s relationship with the sun. most of the earth’s energy comes from

Atmosphere, Weather, &amp; Climate - . why does the temperature in the stratosphere increase?. ozone is broken apart

Weather Vs. Climate - . weather is the set of environmental conditions that occur day to day or even minute to minute

Weather vs Climate - . duration of events is key which leaves a record?. heat transfer occurs by: conduction – atomic

Weather vs. Climate - . weather- condition of the atmosphere in one place during a short period of time. climate- weather

Climate vs. Weather - . what’s the difference ?. climate vs. weather. climate long-term weather patterns of an area

Weather Vs. Climate - . weather : atmospheric conditions in a particular location over a short period of time (a day to a

Climate vs. Weather - . climate: average weather conditions for an area over a long period of time. weather: condition of

Climate vs. Weather - . what comes to mind when you think of weather in…. miami, fl? the sahara desert? alaska?.

Weather vs. Climate - . weather begins with the sun. what is weather?. or. some weather factors. wind. this tool measures

Atmosphere, Weather, Climate, and Storms - . the atmosphere is a cloud of gas and suspended solids extending from the

MODULE 2 WEATHER vs. CLIMATE - Sciencebeat. climate change. module 2 weather vs. climate. you will learn:. 2. the

Atmosphere and weather - . 6th. what are the main elements that make up our atmosphere? if there is not much carbon