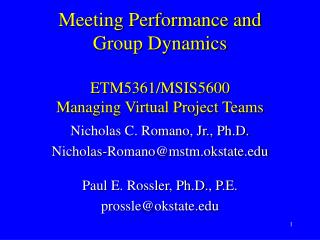 Performance Improvement in PaaS - . group i. improving performance of systems in paas. the paas system is not always easy

Cultural Dynamics - . take off the shoes to win. i was meeting with a group of japanese businessmen in tokyo, and our

Population Dynamics - . population – a group of organisms of the same species occupying a particular space at a

Chapter 10 Group Dynamics and Work Teams - . objectives. list the benefits and liabilities of teams identify what