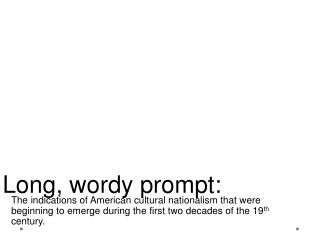 Long, wordy prompt:. The indications of American cultural nationalism that were beginning to emerge during the first two decades of the 19 th century. . OR…. The Growth of American Cultural Nationalism From 1800-1820. Mike Plymell Eli Humphrey. Main Idea. The Long - . sirous partovi, md. and the short of it. randy goldstein, md. a patient with acute adrenal insufficiency is

An Invitation to Steven Speilberg - . a 5th grade writing prompt discovered. the

Some Types of Long Evening Dresses - Long evening dress, it is for formal occasions, and therefore, they provide a

Back to the Basics Double Consonants - . lc2 week -2009 addressing needs. arkiel brown. when do you use double consonants

MLRA Long Range Plans - . objective - upon completion of this training, the participant will be able to understand the

How to Write an AP Lit Poetry Comparison Prompt! - . understand the poems. read the question. what is it asking you to