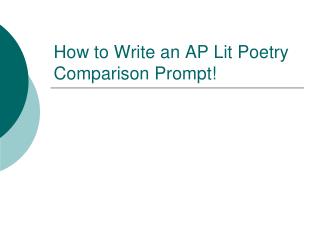 How to Write an AP Lit Poetry Comparison Prompt!

How to Write an AP Lit Poetry Comparison Prompt!. Understand the Poems. Read the question. What is it asking you to look for? Quickly read and interpret each as it pertains to the question Look at the details of the poems themselves

How to Write an AP Lit Poetry Comparison Prompt!

AP Lit - . writing guidelines for college-level papers. when writing at the college level…. things to do. 1. you must

Poetry Analysis Essay - . timed write on friday!. what does it mean to “analyze” a poem?. we are trying to figure out Poetry- Write it! - . you, the poet, will write poetry!. what do you remember?. poets use a variety of poetic, literary

POEMS ABOUT ENVIRONMENT - . “mihai eminescu” school ploie Şti, romania. save the earth! s ave our earth a nd keep it

POETRY COMPARISON - . paddy and abi. hitcher. this poem can be seen as a monologue by the narrator, in which he confesses

Poetry Comparison - . days 101-105 2 nd mini lesson. connection. we have learned how to analyze a series of stanzas in a

POETRY IS..... TAKE 5 MINUTES TO WRITE ABOUT YOUR FEELINGS TOWARDS POETRY - . poetry : the art of making poems “the

AP Literature and Composition Exam - . “the third-rate mind is only happy when it is thinking with the majority. the

Where I’m From Poems - . where i'm from by ella

Synthesis prompt 2008- 6 sources given for original prompt - . write an essay that develops a position on whether or not