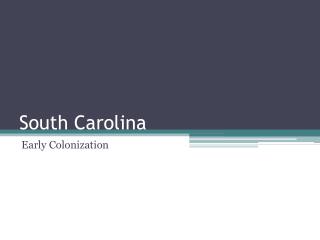 South Carolina. Early Colonization. What we’ve learned so far:. Native American tribes of Cherokee, Catawba, and Yemassee here first. First explorers to come were the Spanish, followed by the French and English. South Carolina - . by dontae hawkins. state song. hold up the glories of thy dead; say how thy elder children bled, and

South Carolina - . by: leighton weber. state capital. south carolina has many big and popular countries but the capital

South Carolina - . authors and artist . wagon wheel spokes . what is the main idea? when did the author or artist first

South Carolina: - . one of the united states. standard 8-1. the student will demonstrate an understanding of the

South Carolina Explorers - . when you hear the word “explorer”, what comes to your mind?. an explorer is someone who