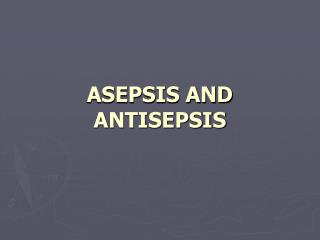 STERILIZATION and ASEPSIS - . general principals of asepsis are laid down by hungarian. these principles were accepted

Disinfection and Sterilization - . disinfection : killing of most microbial forms. disinfectant : a chemical substance

Asepsis is Everything!! - . “the seal is the deal” “everything eventually leaks”. 11 week recall. eric m. rivera,

Aseptic Technique and USP 797 - . definitions asepsis is the state of being free from the presence of pathogenic