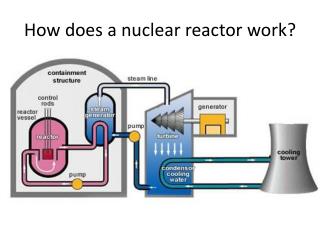 How does a nuclear reactor work?

How does a nuclear reactor work? - PowerPoint PPT Presentation How does a nuclear reactor work?

15-5 What Are the Advantages and Disadvantages of Nuclear Energy?

Nuclear Reactors - . nanik dwi nurhayati,s.si,m.si. nuclear reactor is where the chain reaction under control, fission or

NUCLEAR ENERGY - . where does the nuclear energy come from?. nuclear power comes from fission or fusion reactions of

NUCLEAR POWER PLANT - . the nuclear power plant stands on the border between humanity's greatest hopes and its deepest

Nuclear Energy - . “you are meddling with forces you cannot possibly comprehend.” - marcus, indiana jones and the

Nuclear Power - . by: elliot, kaci and haley. nuclear power is an alternative power source that uses the nuclear fission

Perry Nuclear Power Plant - . 5. how does the power plant work?. contamination of our water? click link:.

Nuclear Reactors - . question:. a nuclear reactor is powered by nuclear fuel rods. after being used for a while, those

NUCLEAR POWER PLANT - . nuclear fuel nuclear fuel is any material that can be consumed to derive nuclear energy. the most

Scenario for the transition of the thermal reactor park to the fast reactor park in Belgium - . p. baeten, h. aït