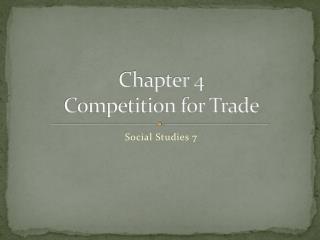 Chapter 4 Competition for Trade. Social Studies 7. Introduction. First Nations and Europeans learned to cooperate because they wanted to trade. What obstacles or challenges might each group have had to overcome to cooperate (why might they not get along at first?). The Fur Trade.

Chapter 2: The Expansion of Trade - . what new products have been introduced into our society as a result of global

Chapter 4 - . the mixed economy. invisible hand price mechanism competition. they all go together . . . you cannot have

Chapter 4 Resources and Trade: The Heckscher-Ohlin Model - . kernel of the chapter. a model of a two-factor economy