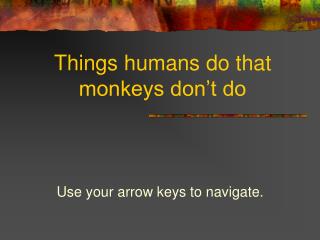 Things humans do that monkeys don’t do. Use your arrow keys to navigate. This presentation will lead you to appreciate some of the behavioural differences between us and our closest cousins on the evolutionary scale, monkeys.

attacks of sleep - . narcolepsy. inward looking. introspective. paralysis on one side. hemiplegia. come between.

CHAPTER 6: HUMANS IN THE BIOSPHERE - . humans in the biosphere in 1778, europeans arrived on the island chain of hawaii.

Humans are 0.1% different - . : 80% of this is from small scale structural variants in our dna : the snps ( pronounces

The Evolution of Humans and the Paleolithic Era - . middle school workshops session 2 craig benjamin. when did the first

Introducing the Planet: The Earth Before Humans - . climate and weather ecosystems and eco-regions biodiversity. climate

Co-Evolution of Dogs and Humans - . what co-evolution means. simply means the mutual evolutionary influence between

Humans in the Biosphere - . honors biology chapter 6. the tragedy of the commons. areas used by everyone are no one’s