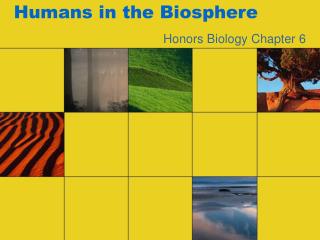 Humans in the Biosphere. Honors Biology Chapter 6. The Tragedy of the Commons. Areas used by everyone are no one’s responsibility Leads to misuse; loss of resources. Renewable Resources. Resources can regenerate (living) or Resources that can be recycled through biogeochemical cycles Ecology - . what is ecology?. ecology- the scientific study of interactions between organisms and their environments,

Energy, Life, and the Biosphere - . the idea that life arose from nonliving things: a. biogensis b. biology

How did physical geography impact the lives of early humans? - . living near water was important because it helped in

The Origin of Humans - . evolution or made in god's image?. mike riddle. m.riddle@verizon.net www.train2equip.com

The Process That Feeds the Biosphere - . photosynthesis is the process that converts solar energy into chemical energy

The Origin of Humans - . evolution or made in god's image?. topics. a history of apemen – the track record two case

What is the Biosphere ? - Ecology is the study of the interactions between living things and between organisms and their