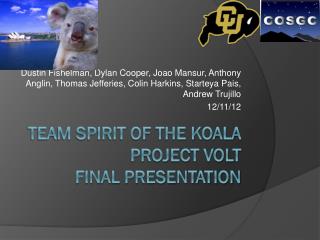 Koala Bears - . charming and unique by lesley licea. a koala bear is a marsupial, meaning that females give birth to

Prayer of the Holy Spirit - . “come holy spirit bring me today to be good, kind and gentle in every way. come holy

Sweet, Sweet Spirit - . by doris akers. there’s a sweet, sweet spirit in this place. and i know that it’s the spirit

Final Report May 31, 2010 - Sponsored by new economy initiative hosted by detroit regional chamber of commerce and

6 th grade Sarcophagus Project - . i want my mummy!. project overview. as a group, you will be creating a sarcophagus for

In this study of the Holy Spirit, we shall ask and attempt to biblically answer two probative questions: Who is the - The