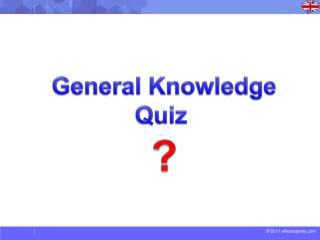 General Knowledge Quiz ?. Which city has the highest population? Tokyo Mexico New York Where was Madame Tussaud [Marie Tussaud ]born? in England in France in Belgium How many bones are there in the human body? 206 201 211. Which of these rivers is the longest? The Mississippi PROBLEMATIC SYMPTOMS IN GENERAL PRACTICE – an appraisal Dr.P.CHITRAMBALAM.M.D ., - . “medicine is an ever changing

Knowledge Representation - . represent and manipulate the domain knowledge . outlines. from knowledge to knowledge