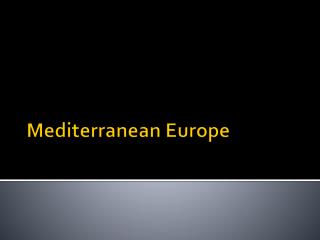 Mediterranean Europe. A History of Ancient Glory. Greece: Birthplace of Democracy. In 2000 B.C., city-states, political units made up of a city and its surrounding lands, were founded Geography of Europe - . ch. 9.1 study the geography of the europe and the eurasian land mass, including its location,