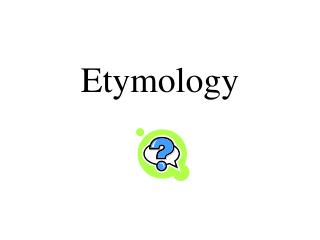 Etymology. Etymology. The study of the origin and development of a word. Word. Borrowing. Borrowing is the act of taking words from other languages to use as English words. For example, tobacco was borrowed from Spanish to name a plant and a product for which there was no English word. Etymology - . ms. reddick english i cp. stems. studying stems gives you knowledge of word structure such as base words

Etymology - . documenting a word’s history. why include etymology?. many users are curious about history and where

Etymology - . what is it???. someone invented every word we know. etymology is the study of a word’s history or origin.

Etymology - The study of word origins. etymology. where do the words we use come from? . english is a blend of words from

ETYMOLOGY - . topic: school. teacher: ella bokhenska, school #1 of ratne. etymology  is a branch of linguistics that

Etymology terms - . euphemism . a word or phrase that is considered less offensive or less vulgar than the one it

Etymology – etymon - . etymology? (1) ‘origin and history of a vocable (= grouping of lexical units [=

ETYMOLOGY Week 15 - . prefix: meaning: examples: a, ab , abs from, away avert, absent, abstain ad to, toward

Etymology Unit Roots - . week 1. why should we know the roots of english?. art - are bequeath (one of my personal