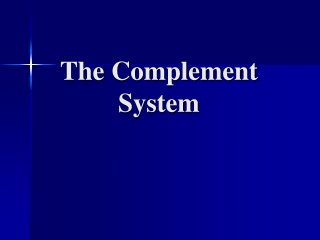 The Complement System. Introduction. The complement system consists of a number of small proteins found in the blood, in general synthesized by the liver , and normally circulating as inactive precursors ( pro-proteins) 2’s Complement Arithmetic - . 2’s complement arithmetic. this presentation will demonstrate that subtracting one

THE COMPLEMENT SYSTEM - . sections from chapter 2 and 11 in parham’s book . complement

THE COMPLEMENT SYSTEM - . help!. complement. a group of sequentially reacting proteins, which upon activation, mediate a

Complement - . complement: history. discovered in 1894 by bordet it was used to refer to a heat-labile serum component

The Complement System - . the functions of complement the complement components complement activation regulation of the