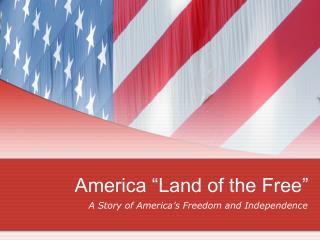 America “Land of the Free”

America “Land of the Free”. A Story of America’s Freedom and Independence. Questions About America.

America “Land of the Free”

US IMMIGRATION - . created by mr. steve hauprich for acceleration and remediation of us history students. historical

US History Chapter 6 The Origins of American Politics - . section 1: liberty vs. order in the 1790s section 2: the

The War of 1812 - . us fights britain. causes. british giving guns to native americans in the west british impressment

The Star Spangled Banner - . by francis scott key. history. war of 1812 watched the bombing of fort mchenry through the

The Pledge of Allegiance - . &quot;i pledge allegiance&quot;. ... i promise to be true. the pledge of allegiance.

The American Revolution For Kids Only  - . by: malik mathurin.

The Star-Spangled Banner Oh, say! Can you see, by the dawn’s early light, - What so proudly we hailed at the

Warm Up: What can you infer about this Political Cartoon? - . review jefferson. 4 th president: james madison. america

White Guilt and the western past: Why is America so delicate with the enemy? - . by: zuleyma, elizabeth, basia and amy.