Sony Xperia Z5 – Can it be Japan’s best smartphone yet? - PowerPoint PPT Presentation 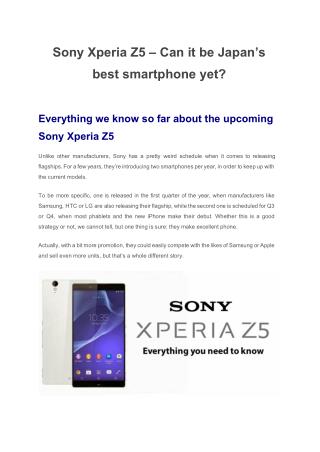 Sony Xperia Z5 – Can it be Japan’s best smartphone yet?

1 / 10
Download Presentation
Sony Xperia Z5 – Can it be Japan’s best smartphone yet?
308 Views

Back in September 2014, the Xperia Z3 was released. A great phone, with high end features, just like a flagship should have. A few months after, we were already thinking about what the Z4 will bring, but surprise!, there was no Xperia Z4, as Sony prefered to launch the Z3 , while the only Z4s we saw was the Z4v, a Verizon-exclusive, and the Japanese version of the Z3 .

But enough with the past, it’s time to focus on the present, or, if you prefer, on the future. We’ve put together all the details we currently know about the upcoming Sony Xperia Z5, covering every aspect – launch date, design, specs and price. Let’s begin, shall we?

Sony Xperia Z5 – Can it be Japan’s best smartphone yet? Design and Implementation of Smartphone-based Systems and Networking - . dong xuan department of computer science and

Culture, Work, and Motivation - . chapter 9. to motivate employees, you must bring them into the family and treat them