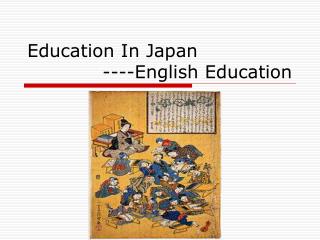 Education In Japan ----English Education Welcome ……. The following presentation Education in Japan will give you a general idea about the education development in Japan and its current situation.

English Medium Instruction as a Tool of Internationalization in Higher Education - . ernesto macaro university of oxford:

A free trip to Japan? - . okay, so what’s the catch?. well, there are a few requirements. you have to be a first

To be Strategic in Internationalization Strategy in the context of Japan’s higher education - . akiyoshi yonezawa, phd

Education for Liberation - . the black panthers and the oakland community school. background. this will be the third

Sociolinguistics and Education - . language use in school and community – relationships and differences effect of

Education In Japan ----English Education - . welcome ……. the following presentation education in japan will give you