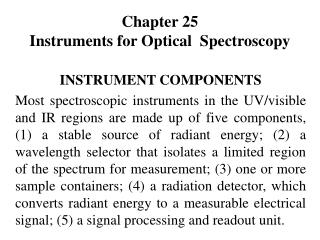 ULTRAVIOLET-VISIBLE SPECTROSCOPY - . semester dec – apr 2010. in this lecture, you will learn:. molecular species that

13.7 Spin-Spin Splitting in NMR Spectroscopy - . not all peaks are singlets signals can be split by coupling of nuclear

Near-Infrared Spectroscopy as a Process Analytical Technology in the Biotech Industry - . presented to the advisory