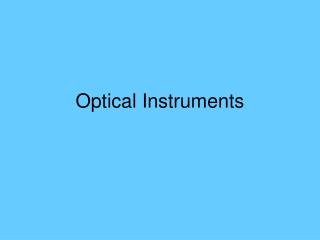 Optical Instruments. Power of a lens. Optometrists, instead of using focal length, use the reciprocal of the focal length to specify the strength of eyeglasses or contact lenses. This is called power . P = f -1. Diopter (D).

Health and HealthCare in the 4.IR Generation - Technology advances always have a role in healthcare delivery mashudu