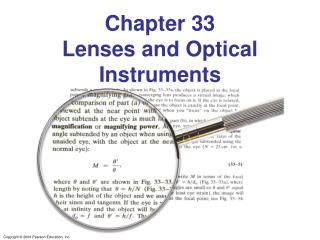 Musical Instruments - . families and properties . around the world, thousands of different instruments are used they vary

Chapter 13 Negotiable Instruments - . learning objectives. what are the requirements for an instrument to be negotiable?

The Magnifying Glass - . the angle that the objects subtends in (a) is greater than in (b). a magnifying glass allows us

Optical Instruments - . power of a lens. optometrists, instead of using focal length, use the reciprocal of the focal