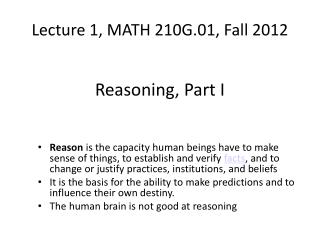 Lecture 1, MATH 210G.01, Fall 2012. Reasoning, Part I. Reason is the capacity human beings have to make sense of things, to establish and verify facts , and to change or justify practices, institutions, and beliefs MATH 374 Lecture 1 - . chapter 1: definitions, families of curves. 1.1: examples of differential equations. what is a

Math College Readiness Forum Fall 2012 - . goals of math crf. communicating and working together for: students who are