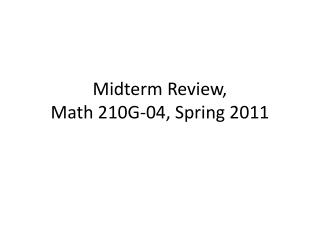 Midterm Review, Math 210G-04, Spring 2011. The barbers paradox asks the following:. A) In a village, the barber shaves everyone who does not shave himself, but no one else. Who shaves the barber? B) In a town, one barber cannot stay in business but two barbers can REVIEW FOR THE SPRING MIDTERM EXAM - . instructions: g o through the slides and answer each question in the packet; the

FCLB – Spring, 2014 Midterm Exam Review - . how can you improve this? after class. a: what are you doing after class?

MATH 135 MIDTERM - . about me :d. 2a combinatorics &amp; optimization and computer science i love math! (and algebra