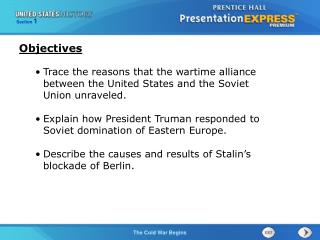 Objectives. Trace the reasons that the wartime alliance between the United States and the Soviet Union unraveled. Explain how President Truman responded to Soviet domination of Eastern Europe. Describe the causes and results of Stalin’s blockade of Berlin. Terms and People.