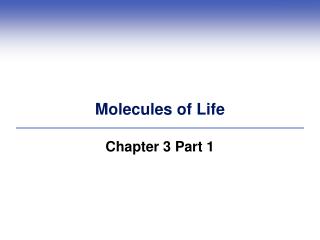 Molecules of Life. Chapter 3 Part 1. Organic Molecules. All molecules of life are built with carbon atoms We correctly call carbon the signature atom of life and living forms, past and present We can use different models to highlight different aspects of the same molecule. What Do Molecules Look Like? - . the lewis dot structure approach provides some insight into molecular structure in terms

The Molecules of Life - . within cells, small organic molecules are joined together to form larger molecules

IV. Early Life - - the first cells were probably heterotrophs that simply absorbed nutrients and atp from the