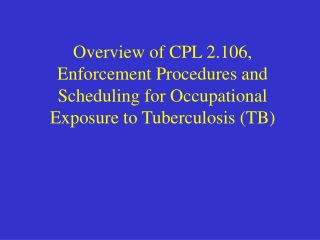 Overview of CPL 2.106, Enforcement Procedures and Scheduling for Occupational Exposure to Tuberculosis (TB). TB Occurrence. Since 1985, the incidence of TB in the general population has increased 14% reversing a 30 year downward trend Occurrence Sampling - . problem: how do you know how much time a particular person, group, or function is spending on any

Occurrence Management - . learning objectives. at the end of this activity, you will be able to: define the term

TB or not TB? - . rachel roth, md. identification and treatment of latent tb in the primary care setting. “ francisque

Occurrence in North America - . originally an indian plant, acorus calamus l. has been brought to the us from europe and