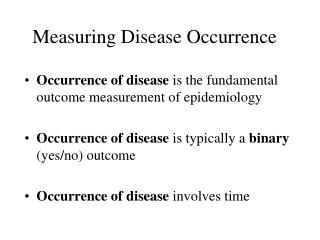 Why to measure disease occurrence - Sources of morbidity data . notifiable diseases. - the list differs from one country

Disease Occurrence I Main Points to be Covered - . incidence versus prevalence the 3 elements of measures of incidence

Measure of disease occurrence and its association with exposure - . dr. premananda bharati professor and head biological