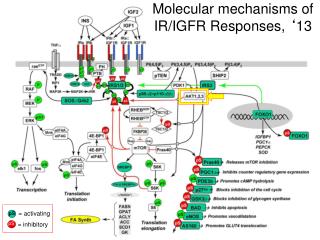 Molecular mechanisms of IR/IGFR Responses, ‘ 13. = activating. pS. pS. = inhibitory. How do we determine the most important “targets”, the timing, the cross regulation, and the “ drugability ” of the various pathways of a signaling cascade?. Phosphoproteomics approaches.

Molecular Biology - . part i: chemistry and genetics part ii: maintenance of the genome part iii: expression of the

A. An overview of molecular biology - . read human molecular genetic ch. 1 a.1. background a.2. macromolecules a.3. dna