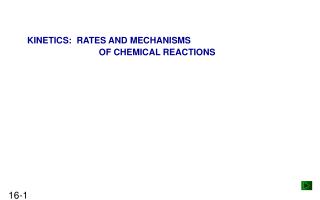 KINETICS: RATES AND MECHANISMS OF CHEMICAL REACTIONS. Chemical Kinetics – t he study of the rate of reactions, the factors that affect reaction rates, and the mechanisms by which the reactions occur. Rates of reaction describes how fast reactants are consumed and products are formed.

Ligand Substitution Reactions: Rates and Mechanisms - . stoichiometric and intimate mechanisms. we can think of a

Chemical Kinetics - . kinetics. studies the rate at which a chemical process occurs. besides information about the speed

Chapter 14 Chemical Kinetics - . kinetics. in kinetics we study the rate at which a chemical process occurs. besides

Lecture 15 - . chemical reaction engineering (cre) is the field that studies the rates and mechanisms of chemical