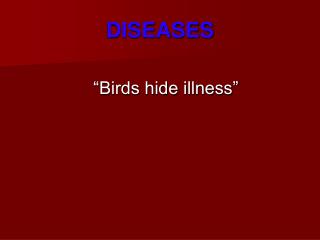 Infectious Diseases (Communicable diseases) - . start with an activity. what does infectious mean? how many infectious

Diseases - . associated with air pollution. chronic bronchitis. occurs when cilia that lines the bronchial tubes are

DISEASES - . types of diseases. a disease is an unhealthy condition of the body or mind. a communicable disease can be

Diseases - . to learn about disease we will cover: classification: domains/kingdoms origins of life difference between

Diseases - . 3. body defenses skin, mucus, &amp; white blood cells. there are bacteria and viruses all around you,

Diseases - . pathogens. agents that invade the body and cause diseases. list and describe the 5 main pathogens and

Diseases - . chapters 21-26. microorganisms and human disease. things to cover diseases of skin and eyes diseases of

Diseases - . chapters 21-26. microorganisms and human disease. things to cover diseases of skin and eyes diseases of the

Diseases - . 7-3.4explain the effects of disease on the major organs and body systems (including infectious diseases such

Diseases - . cambria neese, mandy musick, renee bonnecarre. gingivitis. gingivitis is inflammation of the gums. it is

Diseases - . help me! i’m dying. disease. disease is a plant disorder caused by an infectious pathogen or agent. host