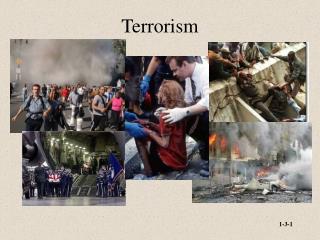 Terrorism. Terrorism Is Theatre. As stated by Brian Jenkins - terrorism expert - terrorist acts are often deliberately spectacular, designed to rattle and influence a wide audience, beyond the victims of the violence itself. The Terrorism Picture I. New York City- Jan 24, 1975 Department of Defense AT Level I OCONUS-A Training Introduction - . september2013. 1. about this training. designed by

Part 1: The End of the Cold War, Desert Storm, and the New World Order Part 2: Islamic Resurgence and Global Terrorism