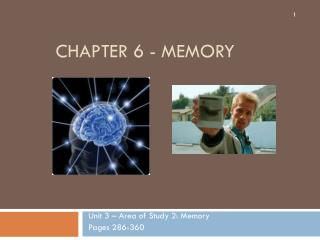 Chapter 6 - Memory - . how to allocate variables and constants in ram and flash memory. strings.c example. /* ** strings

CHAPTER 6 MEMORY - . the foundations of

Chapter 6 - Memory - . memory is the system by which we retain information and bring it to mind. it is an active system

Chapter 6 Memory - . chapter 6 overview. the structure of human memory the nature of remembering how reliable is memory?

Chapter 6: Memory Processes - . some questions of interest. what have cognitive psychologists discovered regarding how we