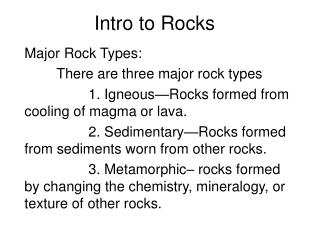 Introduction to Rocks - . geology unit 2. what are rocks?. rocks are simply aggregates (combinations) of one or more

Introduction to Rocks - . 7 th grade science. rocks are a combination of minerals. what are rocks?. no not only are they