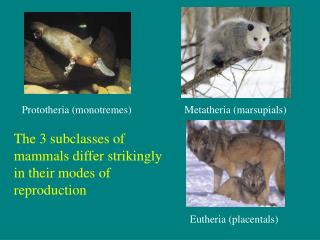 The 3 subclasses of mammals differ strikingly in their modes of reproduction - Prototheria (monotremes). metatheria

Mammals of the Badlands - . by christina hurley. badlands: geologic history. started forming about 75 million years ago

The Evolution of Hibernation in Mammals - Keri massie and emily williamson biology 425, spring 2009. the evolution of

Mammals and their Characteristics - . what do mammals have in common? how are they different? look at the photos below

Subclasses - . concepts : the subclass and inheritance: subclass b of class a inherits fields and methods from a. a is a

Modeling Subclasses - . the world is not flat! some objects in a class may have properties not shared by other

Groups of Mammals - . classification of mammals. mammals range in size from a tiny shrew (1.5 grams) to a blue whale (150

Mammals of Belize - . what is a mammal? - fur (pelage) mammary glands 3 inner ear ossicles (bones). do you think the

Functions of Aquaporins in mammals - . nephron. the role of aquaporins in the kidney. kidney. cortex. proximal tubules.

Diversity of Mammals - . 5 th grade . there are 3 main groups of mammals. these groups differ in how their young develop