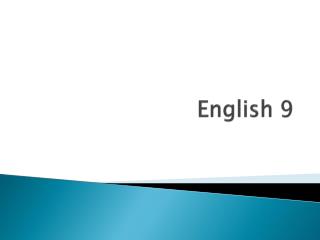 English 9. Objectives. I will know, understand and be able to perform all classroom procedures and expectations. I will learn the basic ideas and concepts involved in reading poetry, plays, and Shakespeare.

ENGLISH 9 - . exploring universal themes in literature: the archetypes. what is an archetype?. archetype is a greek word