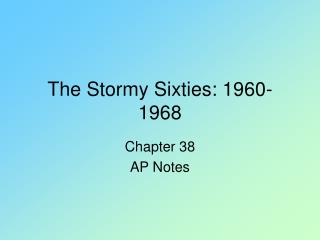 The Stormy Sixties: 1960-1968 Chapter 38 AP Notes Objectives… Describe the high expectations of Kennedy’s New Frontier and political obstacles… Analyze the theory and practice of Kennedy’s doctrine of “flexible response” Describe Johnson’s succession to the presidency in 1963…

The Hobbit &amp; J.R.R Tolkien - . by lucas garcia. next. teachers. students. how to teach this powerpoint. - for

1960’s Leaders - . john f. kennedy – president of the u.s. was a representative then a senator from massachusetts.

Chapter 28: The New Frontier and the Great Society - . questions to consider. what issues and events helped kennedy win