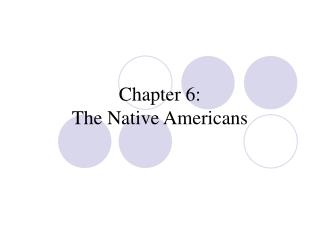 WESTWARD EXPANSION Chapter 6 - . the transformation of the west. the why and how causes/reasons. push factors: civil war

Cowboys vs. Indians: Struggle of the western Native Americans - . mining grows. discoveries of precious metals in the

Chapter 6 Moving towards Independence - . british acts that lead to revolution. britain tried to control the colonies in

Chapter 6 The New Republic 1789-1816 - . chapter focus question : how did the united states build a government, expand

US History Chapter 6 The Origins of American Politics - . section 1: liberty vs. order in the 1790s section 2: the

Growth, Expansion &amp; Native American Removal - . chapter 9 and 10. question. after the revolutionary war why did

Chapter 6; Section 4 - . other battlefronts. fighting on the frontier. in the west settlers clashed with native americans