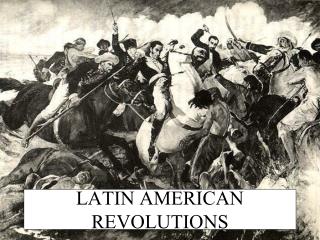 Salvete ! Welcome to Latin 2 - . 9/9/13. propositum : dwbat identify the basic goals and structure of their latin course

Meeting the Challenges of Secondary Education in East Asian and Latin American Countries - . presentation for kuala

REGIONAL ORGANIZATIONS: THEIR EVOLUTION IN LATIN AMERICAN AND THE CARIBBEAN - . david a. novelo. objectives. to

Bolivar and San Martin: The Latin American Revolution - . hamza khalid a1 ap world history. background. both were of

Exhibits relating to the Latin American Revolutions and Haitian Revolution - . what is this?. haitian revolution.