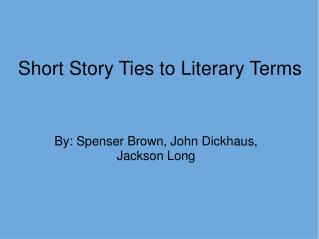 Short Story Ties to Literary Terms. By: Spenser Brown, John Dickhaus, Jackson Long. "The Most Dangerous Game" By: Richard Connell. An analogy  Comparison made between two things that shows how they are alike in some way.

Literary Terms - . point of view. the relationship of the narrator, or storyteller, to the story. it is the style in

Elements of Short Stories and Literary Elements - . the setting is the place where the story takes place. setting

Modern Short Stories - . “there are only two or three human stories, and they go on repeating themselves as fiercely as

THE SHORT STORY - . so what is a short story, anyway?. short story. no, it is not a book shrunk down to fit into the

Elements of a Short Story - . what are the elements that shape a short story?. plot- sequence of events that ties the

Literary Elements Through Short Stories - . literature 8, fall 2010. do now: when done with quiz, turn in at tray, pick

Literary Elements - . short story terms. plot. series of events that make up a story. the plot triangle. a tool to

Short Stories - . about the authors literary terms story plot. story plot. setting – where and when the story occurred.

Short Story Terms - . what is a short story?. a short story is : a brief work of fiction where, usually, the main

Literary Devices (elements and Techniques) of fiction - . setting (element). the setting of a story is the time and place

Characteristics of the Short Story - . short (duh): can be read in one sitting concise: information offered is relevant

Fancy Literary Terms Explained by Disney - . courtesy of buzzfeed.com. theme. a common thread or repeated idea that is

Story Literary Elements - . some basics that every good story must have …. every story needs characters. animals.

Short Story Literary Analysis - . this is an essay which will analyze the author’s development of theme in a short