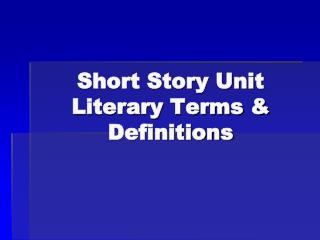 Short Story Unit Literary Terms & Definitions. Parts of Plot. Plot: The sequence of events in a story. Exposition: The basic situation of a story—this is where the reader learns the background information necessary to understand the story. Exposition Example. Short Story Course Analysis for ’’The Star’’ by Alasdair Gray’s pen - . alasdair gray. - he was born in glasgow