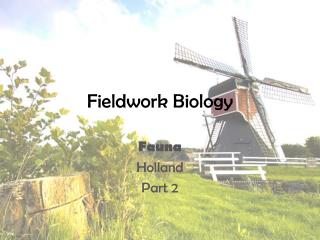 Fieldwork Biology. Fauna Holland Part 2. Introduction. The Braakman was a large tidal inlet in the middle of Zeeuws-Vlaanderen , on the south bank of the Westerschelde , west of the city Terneuzen . Fieldwork - . the nature of fieldwork. researchers have two major options for collecting data: developing their own

Fieldwork - . introduction to sociology. dates. july 1 and 3 for mw class july 2 and 4 for th class deadline of

Fieldwork ISA - . worth 25%. what is an isa?. it is a controlled assessment worth 25% - it is the coursework aspect of

Ethnographic Fieldwork - . fieldwork: participating in order to write. what do people actually do when they are