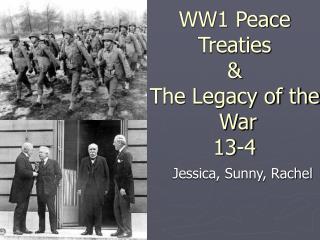 WW1 Peace Treaties & The Legacy of the War 13-4. Jessica, Sunny, Rachel. The Story so far…. World War I is over, the killing has ceased. January 18, 1919, a conference was built at the Palace of Versailles. The Allied powers, the victors of WWI, meet to clean up the war mess. Prince of Peace - . prince of peace “for to us a child is born, to us a son is given, and the government will be on his

Teaching About Treaties - . networking meeting november 2011. why teach students about

HOW THE NUMBERED TREATIES AFFECTED COLLECTIVE RIGHTS - . conditions of the numbered treaties reasons for numbered

Those Who Should NOT Have Peace of Conscience - . “and the peace of god, which surpasses all understanding, will guard

For what purposes do we use treaties? - . purposes of treaties. illustrate the development from contractual towards law

The Paris Peace Conference &amp; The Treaties - . k.j. benoy. a sudden end. when the central powers collapsed, it

The Legacy of Churchill’s Sinews of Peace Speech 1946-1989 - . “the sinews of peace” winston churchill. to what

A Flawed Peace - . a conference to decide the outcomes of the war was convened in paris jan 1917 although 32 countries